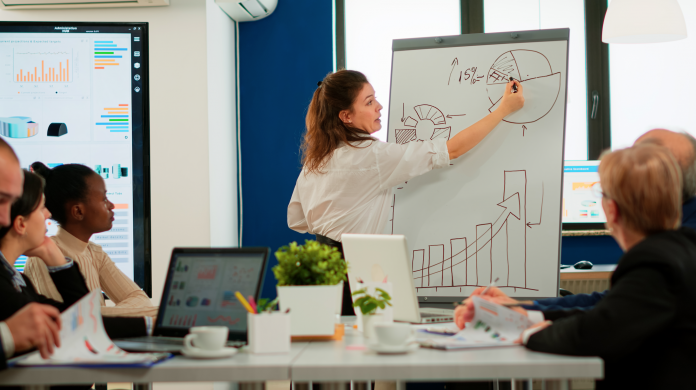 For some people in positions of power, one of the most difficult tasks is giving feedback. Being able to give constructive criticism is vital for any leader, but it has to be done carefully. Too often, leaders fall into the trap of using destructive criticism as a way to motivate their team. However, this can lead to feelings of insecurity and resentment among team members.

Some leaders also fear that their feedback will be misinterpreted or that they will be seen as too negative or critical. As a result, they give feedback that is vague and unhelpful or avoid giving any feedback at all.

Instead, leaders should focus on using criticism as a way to build trust, empower team members, and enhance team collaboration. Before looking at how to give more positive feedback, it’s important to describe what destructive criticism actually means and the impact it can have on employees.

What exactly is destructive criticism?

People that give destructive feedback often resort to personal attacks instead of exploring solutions to help the person learn from their mistakes. When criticism is excessively negative or vague, it only damages an individual’s confidence, which ultimately damages working relationships and lowers team morale.

The effects of destructive criticism

Destructive criticism can have a number of negative effects, both on the person who is being criticized and on the person that is giving the feedback. A study published in the Journal of Applied Psychology showed that people who received negative criticism without specifics felt more angry and tense, set lower goals for themselves, and doubted their own abilities.

If employees regularly receive negative feedback, it can create a toxic work environment that causes workers to doubt their self-worth and question their abilities. In turn, this can lead to poorer work performance, increased stress levels, and a higher employee turnover rate.

Giving destructive feedback not only has an impact on the individual but also negatively affects the team as a whole. When team members feel like they’re being constantly denigrated, they’re less likely to work effectively as part of a team, and they’re also less likely to come up with new ideas and take risks. This can lead to a decline in productivity and creativity, an increase in conflicts between team members, and even workplace bullying.

In order to avoid these negative consequences, it’s important for leaders to avoid destructive criticism whenever possible and focus on giving more positive feedback.

To steer clear of gaining a reputation as a toxic leader, here are nine ways to avoid giving destructive criticism:

Also, avoid giving feedback when you’re stressed. If you’re feeling angry or frustrated, wait until you’re calm before giving feedback. This way, you’re more likely to be clear and concise in your criticism.

Give negative feedback in private

While positive feedback delivered in public is usually welcome, giving negative feedback in front of others can be seen as a threat. It can make the person feel vulnerable and insecure and will only embarrass or humiliate the person receiving the feedback. It can also lead to a loss of trust. If possible, schedule a private meeting to give feedback so that the conversation can be had in a more relaxed setting.

If you start by explaining why you’re giving feedback, it depersonalizes the criticism and lowers the recipient’s defenses. When you explain your reasoning for giving feedback, it can help the recipient better understand your perspective. This, in turn, may make them more likely to take the feedback seriously and use it to improve their performance.

First, it’s important to listen to what the person has to say before you give feedback. You can use this information to better understand their situation and to improve your communication. Second, carefully listen to what the person has to say after you give feedback. This can help you understand if there are any gaps in your feedback and gives you the opportunity to clarify any misunderstandings. It can also help you identify any additional resources that might help the person improve their performance.

When people feel heard, they’re more likely to listen to you in the future. According to one study, the more employees felt listened to by their managers, the better they thought their managers were at providing effective feedback.

Be specific and give recommendations

Instead of making general comments, give specific examples of what the person did that was not up to the expected standard. Breaking the feedback down into key points will make it more actionable. For example, if a person’s report isn’t as clear as it should be, explain how they can improve it by adding a list of bullet points and a summary of each section.

Giving recommendations will help the person avoid making the same mistakes in the future. If the person needs extra support, offer assistance to help them achieve their goals.

Watch your language and tone of voice

The words you use can have a big impact on how the person receiving the feedback interprets your comments. For example, using “you” statements like “you’re always late” can come across as confrontational and make the person defensive. Instead, use “I” statements like, “I think the team will perform better if we all come in on time.”

The way you communicate your message is just as important as the message itself. Talk calmly and respectfully so that the person receiving the feedback feels comfortable, supported, and respected.

Focus on the work, not the individual

Constructive criticism should always be focused on the work or the outcome, not on the individual. Avoid making personal attacks or attacking the person’s character. Instead, draw attention to what the person could have done better and their working processes.

End on a positive note

Giving regular, positive feedback shows your employees that you want them to succeed. However, when you have to be critical, highlight the employee’s strengths first before bringing out the criticism. A common technique is the “feedback sandwich” method. You start off by focusing on their strengths, then you focus on areas that need improvement, and finally, you finish with a positive comment. This way, they won’t feel you’re being too critical.

Constantly criticizing someone will only damage their self-esteem and affect their job performance. Naturally, people make mistakes, and giving critical feedback is a necessary part of any leadership role. However, it’s important to strike a balance and not become overly critical. What is more effective is to create a supportive work environment where people are allowed to make mistakes and learn from them. The only exception is if you see that the mistakes are regularly and negatively affecting your team’s productivity or morale.

By following the strategies outlined above, you can improve the way you deliver feedback and create a more positive, efficient team. Keep in mind that the goal is not to avoid all criticism but to focus on constructive criticism that will help individuals thrive and feel more satisfied in their jobs. This will lead to more effective teams that enhance the culture and productivity of the organization.

30 small business ideas that take less than $10K to start