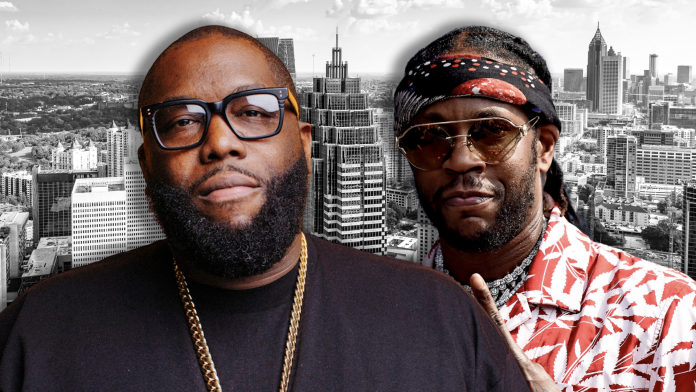 A proposed nuisance ordinance was first introduced in April by Mayor Andre Dickens with the aim of controlling violence in the city. However, according to famous artists and celebrities from Atlanta, the ordinance is only targeting and closing black-owned businesses, impacting the market and preventing potential investors from establishing new businesses.

Famous rappers and Atlanta residents, 2 Chainz and Killer Mike, have also indicated various adverse effects of the ordinance, which they believe are due to the city’s government. This includes preventing black minorities from investing in Atlanta and forcing small business owners to close their businesses if they aren’t able to control activities in their surroundings. They protested the injustice of this ordinance in the city council meeting and showed concern over how they were being targeted.

Both rappers have been vocal about their views and opinions in the past years. They are also famous for doing their part to support local people and businesses. They not only represent the black community in Atlanta but a large number of people who hold the same opinions and interests. Therefore, their views and beliefs matter a lot, as they have the power to make a difference and help people. It explains why Killer Mike and 2 Chainz have been trying to bring the authorities’ attention to the unfairness of the nuisance ordinance. Attending the city council meeting was part of their aim to help people.

Since the nuisance ordinance has already closed several properties and aims to close more in the future, Killer Mike and 2 Chainz attended the meeting to push Atlanta’s authorities to change the ordinance. They believe that crime and violence in Atlanta have nothing to do with small businesses. Also, crime can affect any city in the country, so pointing fingers at black-owned businesses are unfair.

Killer Mike and 2 Chainz are trying hard to preserve black-owned businesses and help them continue operations. This is because the nuisance ordinance only targets small businesses, such as nightclubs and restaurants, that play a significant role in the city’s community and culture. Both rappers attended the city council meeting on August 1.

In the meeting, Killer Mike explained how this ordinance could impact small businesses that are the backbone of Atlanta. He indicates that Atlanta’s government is more focused on supporting larger corporations as opposed to smaller restaurants, bars, and other businesses owned by locals. Considering how many corporations are coming to Atlanta, it’s essential to have a thriving nightlife that keeps people entertained. However, more prominent brands like Hard Rock, W Hotel, and others are dominating the market. Killer Mike also added that small businesses are trying hard to establish themselves, but this new ordinance will wipe them out before they get an opportunity to grow. During the meeting, he asked an important question as to whether the city will remain a place where people can thrive and grow.

When 2 Chainz took the podium, he gave his views about the unfairness of the nuisance ordinance. He introduced himself as an Atlanta native and owner of two restaurants: Escobar Seafood and Escobar in Atlanta. 2 Chainz says that he wants to share his blessings with others by helping the community to thrive. He was vocal about the fact that crime is present in every corner of the world- it’s just not about Atlanta. 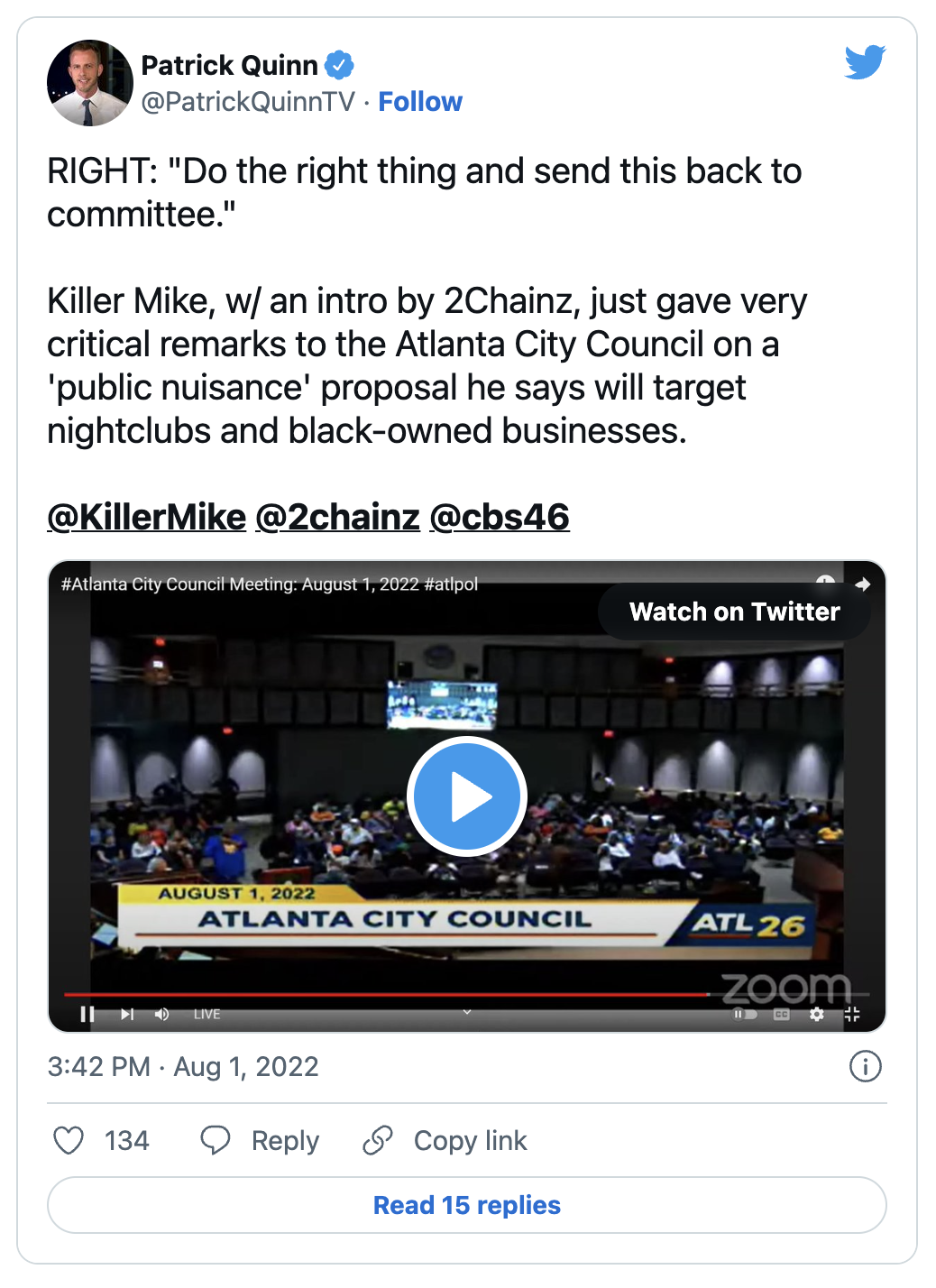 Mayor Andre Dickens introduced the ordinance to reduce the crime rate and violence in proximity to nightclubs in Atlanta, as the Atlanta City Council’s members believe clubs are a hotspot for violations of Atlanta’s laws and regulations. Jaffrey Williams Sr., the father of Young Thug, was also present in the meeting. He raised some good questions and asked the authorities whether they’d close city hall if the crime rate nearby started increasing. He was furious about the unreasonableness and injustice of the ordinance and says that the government first blamed artists for crimes in the city and is now labeling the city’s nightlife as the reason for the violence.

Overview of the Ordinance

The nuisance ordinance was established to protect the citizens of Atlanta. According to the city council, violations are increasing over time due to the city’s nightlife. The government also claims that in the last two years, most crimes in the city have taken place around businesses that operate at night. The city’s business owners are unsatisfied with the ordinance and consider it an ordinance against black businesses. This is because many businesses that have been targeted through the ordinance belong to black citizens in Atlanta.

People are asking authorities how a business can be a cause of violence. The nuisance ordinance has recently been amended due to Mayor Dickens’ nightlife crime division report. This new update in the law indicates that any residential or business property that the city’s authorities have seen to cause nuisance twice in the last 24 months or two years will be closed. This means you can expect many small businesses to shut down in the coming days. While the ordinance aims to protect people, black business owners ask authorities how they will protect small businesses through such an unfair crackdown.

Some crucial aspects of the Nuisance Ordinance are:

According to the authorities, the nuisance ordinance will help police and other authorities establish peace in the city. It will also allow authorities to close restaurants that primarily opened as local food services but are now bars or clubs, which is not safe for citizens. These restaurants have to prove that at least 50% of their gross sales come from prepared meals rather than selling alcoholic beverages. The city can cancel their liquor licenses if it cannot verify them. These businesses might also have to pay significant penalties if they continue operating in Atlanta. The nuisance ordinance states that any business the city considers a threat to the peace in Atlanta has to face legal action.

Business Closures Due to the Ordinance

Encore Hookah Lounge, located downtown, is the first nightlife entertainment venue that the Atlanta Police Department shut down. The entertainment venue had a two-year streak of violence that, unfortunately, caused two shooting-related deaths. According to the Atlanta Police Department report, Encore Hookah Lounge faces charges of aggravated assault which led to 170 incoming calls to the police.

Besides that, according to the city’s authorities, Johnny M’s Pizza Bistro was shut down after reportedly violating the ordinance. After that, Mims (the business owner) has been questioning the justice of the ordinance, as he believed the law only targeted black people. He believes that whatever crime and illegal activities happen outside the restaurant aren’t under his control. Mims said that he couldn’t control everything that happened in the city- so it was not his negligence that caused the problem. He believed that black minorities were the victims of the nuisance ordinance.

How is the Nuisance Ordinance Further Impacting Businesses?

The ordinance has empowered the city’s government and given it the authority to close any property associated with a high crime rate. In fact, the law allows authorities to shut down any business or residential property, even if the owner wasn’t involved in the crime. The law implies that any violent incident near the property will be the owner’s responsibility.

The nuisance ordinance was introduced in 2022 to limit the crime rate in Atlanta. But the forced closure of businesses and residential properties has pushed citizens to protest against the law. This is also because most of the closed properties are black-owned businesses.